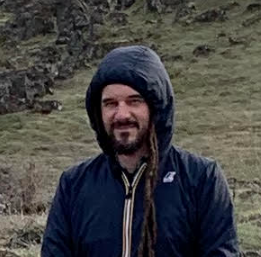 Mike Savage is a Portland, Oregon based artist.  He works primarily on paper with acrylic paint, Conté crayon, pencil, pen, tape and gesso.  Interested in architecture from a very young age he began using a 35mm camera as a tool for capturing images while creating a photographic diary.  It was shortly after a pivotal trip to Spain when he had the profound realization that you may find in the act of “painting” the sum total of all the arts including film, sculpture, collage, photography, dance, music etc.  Upon returning from Europe this idea became the primary motivation to pick up a brush which continues to provide energy to this day.

Mike began his studies in architecture at Northeastern University in Boston and then went on to complete his BFA at the Massachusetts College of Art and Design.  In 2012 he was accepted to the prestigious Columbia University painting intensive program in Paris where he spent a month at Reid Hall in Montparnasse.  There he engaged in intense morning lecture studies and focused afternoon studio work with critique.  Coming out of that experience Mike and his family felt the time was right to fully immerse themselves into European culture.  The family moved to Paris from 2014-2016 and it was there that he was able to haunt magnificent museums and paint every day.

His creative process is his path to self discovery and he feels his paintings are like meditations or prayers.  Now back in Portland the aim of his work is to provide the viewer with a respite from an accelerated world.  Mike was born in Massachusetts and has also lived in Colorado, California, Oregon and France.

Eagle and the Heron